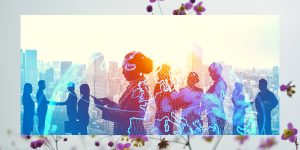 –by a brilliant and beautiful friend who wishes to remain nameless

Six little letters follow my name—B.A., M.A., J.D.—and two precede it—Ms. So it appears that the feminists have won out. I am my own person. Each night when I come home, I have no frets over what to cook that man who hangs around the house. I don’t have to wash his clothes, iron his shirts, or please him when he chooses. In fact, he doesn’t even exist. And why would he? The ideal is that I—29 years old, attractive, fit, educated, professional, SWF—can pick and choose when, where, how and with whom I want to be entertained. Men, if anything, serve only the purpose of being playthings at my beck and call.

But how did this happen, I so often wonder. As I step toward the door and swipe up the newspaper from the front stoop. How is it that coming home to a great big, beautiful, empty apartment each night satisfies their ideal? The proverbial they… or better, the feminist they. The ones who say that girls like me have too much talent, too much chutzpah, too much something, to just settle into the traditional role of wife and mother.

Regardless of my own personal desires, the pressure has always been there. My mother wanted me to be independent. To shirk the confines of her role as wife and mother of seven children. I remember the teachers who preached the same message. “I think you’re going to run a company one day. You’re going to do big things.” I was going to go places and see things. To live and learn and grow. And all that, I would do alone. Because any other way would cut into that independent ideal and hinder my growth as a woman.

And so I did. I traveled the world. Challenging mind and spirit—overcoming obstacles and slaying dragons. I filled my mind with wonderful memories of people and places and things. Fulfilling their ideal, I left mine behind.

All I ever wanted was to come home to a loving family. A family that I helped to create and foster. A family that needed me. Instead I got caught up in that feminist ideal that told me to be myself first and the rest would follow—if I wanted it to.

But all that ideal has done is make me more educated—more marketable for a job and less marketable as a wife. I have outdone the large percentage of the male population and left myself with a limited marriageable gene pool. After all, now I need a man who has at least equivalent credentials to me—if not better. I have more to discuss and more to opine. It is only right that my “spouse” can keep up, right?

Ironically, in all of this, I feel less and less of a woman as I become more able to compete with men. Those moments when I feel most like a woman come when a man treats me as such. When a stranger on the subway jumps from his seat so that I can rest my wearied body. And when I accept, we are both affirmed. He as protector, me as esteemed—not for who I am to him, but for what I represent—as bearer of children, progenitor of the species.

Do little girls of today even know the phrase “women and children first”? Do they comprehend its purpose? Or has the purpose left us with the influx of humanity-destroying tactics—cloning and fatherless conception to name a few. Do little girls know that the true feminism lies in the power of being feminine?

It lies in our beauty, our depth, our emotion, our intuition. Our power is that we are not men. For that, men not only need us, they love us. Today most men (there was a day when it was all men), enjoy women who enjoy being women. Not those women who fight to be masculine—strong, powerful, protective, independent. . . and not those who fight for control—flaunting their sexual resources before men to suppress them with superficial power.

The greatest contentment in womanhood is being a woman. It’s not external. It is an inner confidence that says “I am a female, and I should be treated like a lady.” That confidence swings open doors and frees up seats on the subway. It hails taxi cabs and gets the luggage into that little overhead bin on the airplane. It is the confidence that all women should have, simply because they are women.

We have value because we were made in the image of God. We were given a special purpose as helpmate. This is not the lesser calling. What man (what human) has ever accomplished anything great without help? Who can say that they did it all on their own? The position of helper is to be esteemed. The task of under girding does not come without its challenges.

Consider a horse. Perhaps not the analogy you were looking for, but bear with me—there is a point here. A horse is a beautiful, graceful animal. It is also strong-willed and powerful. A pastor once likened the definition of the word meek to a horse. “Meek,” I queried, “isn’t that like being weak, or feeble-spirited?” “No,” he corrected me. “Meekness is strength under control.” Ah, I knew right then, that is the essence of womanhood. We know who we are. We know what we are capable of. But the strength of women, like the strength of a well-bred horse, is capturing that power, beauty, and grace and allowing it to be tamed—only that it might be useful.

The strength of a woman and the reason men appreciate us, is that they know we have the intelligence, wit, charm and verve to overpower them. We have the strength—albeit cognitive—a to rule the world. But our strength is only one factor in finishing the race. This race—this life—requires teamwork. It requires extolling the gifts of both men and women and allowing them to work together. Giving due honor to the strengths of each player. Man was not meant to be alone. Neither was woman. We are meant—as our bodies, our minds, and our hearts do testify—to fit together perfectly and to accomplish together whatever our Creator put before us.

As for my story. It does not end here. I can no longer allow myself to be swept into the current of feminism. Neither can I allow resentment for their cause to hinder my future as a woman. I must step forward, satisfied with all that I have accomplished, and look up to the God who works all things together for His purposes. There are no wasted moments as a woman of God. He has planned the future—for prosperity and hope.